Home/Patient Experiences/Coral – My 17 years Living with AL Amyloidosis.
Previous Next

My Name is Coral and my symptoms started on boxing day 2001 when I woke with swollen ankles and a pain in my chest.

A visit to A&E, admission to hospital and a kidney biopsy confirmed the diagnosis of AL amyloidosis. I was 39 years old and had until then been very active and healthy with 2 young children aged 9 and 13. We had never heard of amyloidosis but the seriousness of such a diagnosis was quickly brought home when we were informed by the doctors that “ I was running out of time” and an autologous stem cell transplant was suggested to try and stop the disease. What a shock! Our lives were transformed over night from ones of happiness and dreams for the future to ones of fear, sadness and the unknown.

From the very first injection to stimulate my stem cells I became tachycardic and my kidneys stopped working properly. I ended up in ICU where there was a race to stabilise my condition. My wonderful renal physician gave me hope when he said “I have seen worse”.

My girls were only allowed to visit me for very short periods of time and it must have been so scary for them to see me attacked to so many lines. But my husband Patrick and I tried very hard to explain in language they could understand what was happening and how sick I was.

Eventually enough stem cells were collected for one transplant. Unfortunately the first bag was contaminated which was another blow. After spending the next month in hospital recuperating, my stem cells, which had been stored, were returned to my blood system through an intravenous infusion.

The nausea was indescribable and then I ran into many other medical problems and was rushed into ICU once more with internal bleeding, accumulation of fluid and very low blood pressure. Slowly my wonderful medical team began to control some of these life threatening issues and I was able to return to the ward where my renal physician felt I should see more of my children and ordered a desk and chairs so that they could visit me after school and do their homework! What a blessing that was. They even got to stay the night.

My husband Patrick had just started a new job. He immediately had to adjust his life to looking after the girls with the help of my mother who had dropped all her activities to come and help. Patrick came into the hospital every morning before work to help me shower. It was the only place we could be alone together, to cry and hold one another and I will cherish those times for ever.

As I slowly recovered in hospital from the stem cell transplant I used to imagine what it would be like to see my children graduate and get married as my future still seemed bleak.

I celebrated my 40th birthday while still there but eventually got home after 4 months followed by a few admissions for pneumonia. It took quite a while after discharge for me not to panic when little things didn’t seem quite right.

But gradually I improved and from mid 2002 to 2008 apart from visiting the hospital for check-ups and dealing with symptoms of early menopause and osteoarthritis, my blood tests slowly returned to normal. It was during this time that I wrote letters to all my family telling them how much I loved them and how I really felt in case I wouldn’t be there to tell them in person in the years to come.

In 2008, just when life was going along well, a phone call from my haematologist threw our lives into chaos again. My light chains were rising and other blood levels indicated a diagnosis of myeloma as well, soon confirmed through a bone marrow biopsy.

I was started at once on oral revlimid, a derivative of thalidomide, which stabilised the situation quite quickly allowing me to see my eldest daughter graduate from university and marry. How fortunate I felt to be at her wedding.

But by 2011 the revlimid had ceased working and my haematologist suggested another stem cell transplant. That was a very hard decision remembering what I had been through the first time but I was fitter this time and there seemed to be no other treatment that could put me back into remission again.

But there was a problem. All my collected stem cells had been used for my first transplant so I needed more. This proved to be a far more difficult procedure than planned. After a month in hospital constantly having needles, I understood enough stem cells had been collected. I was shattered to be told that more needed to be collected. 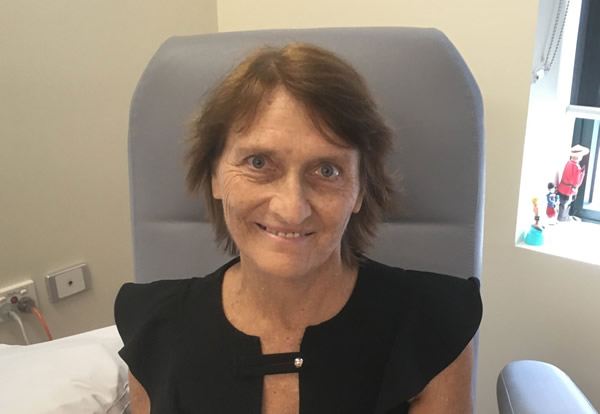 After a two month break which Patrick and I needed to gather ourselves together emotionally, the rest of the stem cells were collected. I entered hospital in November 2011 and received the stem cell transplant the next day. This time with the help of improved antiemetic’s I tolerated the procedure much better and was out of hospital in a month.

Until 2015 life was good again. My kidney function even improved. But then I came out of remission once more and started the treatment of choice, IV velcade. The first course made me very ill and I spent the next month and another birthday in hospital. But then I began to tolerate the treatment and remained on it for two years during which time my eldest daughter had a baby boy. To see and hold our first grandchild was a dream come true.

After 2 years the velcade ceased working and I was placed on IV carfilzomib, a proteasome inhibitor with proven activity in relapsed or refractory Multiple Myeloma. But after a couple of months my kidney function worsened and in September 2017 I was again admitted to ICU, this time to have 10 litres of fluid drained, due to kidney failure.
I learnt then that I would need dialysis for the rest of my life, however long that was to be as the amyloidosis and myeloma were still not under control.

While I was in hospital my youngest daughter got engaged and I was allowed to have a hospital pass to help her buy her wedding dress. A time of great joy tinged with sadness as I didn’t know whether I would be at her wedding.

After a month in hospital on dialysis I was started on a monoclonal antibody daratumumab and by December was well enough to have a fistula placed in my arm for home dialysis.

Patrick and I went through the training together and with the wonderful support of my renal physician, the incredible dialysis staff and my haematologist I now dialysis at home. This has changed our lives completely. Although I still have to attend the hospital once a month for IV daratumumab and once weekly for some other drugs, I feel far less tired and much fitter and Patrick and I now feel we have some control over our lives again.

Although my amyloidosis journey over 17 years has at times been extremely difficult and very frightening I am just so thankful and feel so blessed to still be here and to see both of my girls married and welcome a grandson.

I am sure there will be more challenges ahead and how much life I have left no one knows but I have learnt that every day is a bonus. I have also learnt to take one day at a time enjoying that day as much as I can.

I know that everyone’s journey is different but I have learnt to ask my medical team many questions, especially if I don’t understand a treatment or am concerned about a procedure.
Living with amyloidosis can be scary and over whelming both for the patients and the family but talking and sharing your feeling is so important.

And of course I know I could not have lived through some of the darker times over the last 17 years without the wonderful support and love of Patrick, my children and my family and of course my incredible medical team.