In about 2006 I experienced chest pain, but my doctors came up with no explanation and it was put down to either a panic attack or chopping wood with an axe!

However, a remark was made at the time that that I had a slight thickening in my heart and a left bundle block on ECG, which may it was said have been related to previous high blood pressure. With the knowledge I have now, I sometimes wonder if this was the start of my amyloidosis journey. For during a routine check-up with my cardiologist in 2018, I mentioned that I could no longer work because of carpal tunnel syndrome in each wrist limiting dexterity.

I was sent for an echo cardiogram which showed clear thickening of the heart. A DPD scan was then performed that clearly indicated amyloidosis in the heart.

In 2019 I had my first appointment with a haematologist, Dr Simon Gibbs, who started me on teavigo green tea capsules, and ordered a bone marrow biopsy. followed by a heart biopsy. The bone marrow biopsy showed smouldering myeloma and the heart biopsy confirmed ATTRwt amyloidosis. In the space of a very short time I was found to have two worrying diagnoses.

I was then placed on close monitoring, but because I was not having treatment, except the green tea, I was allowed to visit Greece for 9 weeks during July and August. While there, I noticed that I began to tire much more easily but as I could still climb the Acropolis I put it down to the summer heat.

On my return my myeloma counts were found to be much higher and went on rising over the next month. In November I was referred to St Vincent’s Cancer Centre where the IRLL trial was being run for newly diagnosed multiple myeloma patients who are ineligible for high dose chemotherapy and too old for autologous stem cell transplant.

Treatment for 2 different diseases can have its problems. Being on the IRLL trial to treat the myeloma made me ineligible for the tafamidis trial which may have helped to slow the progression of my ATTR disease.

I was placed on was lenolidomide also known as Revlimid an analogue of thalidomide, and dexamethasone. I also started receiving Zometa, a drug to help slow bone loss and prevent breakages, which can happen in people with myeloma.

Unfortunately, the Revlimid and dex however did not stop my myeloma numbers rising.

My treatment was complicated when on December 12, I was rushed into hospital with a vibrating buzz in my chest and other eerie feelings apparently caused by depleted calcium and magnesium. My heart rate and rhythm were chaotic and I spent the next 10 days in hospital, including Christmas day, receiving constant monitoring and eventually a heart reset through an electric shock treatment.

My time at home only lasted 2 days before I became unwell again with diarrhoea, inability to urinate, high temperature and low blood pressure. I was rushed to A&E and found to have sepsis. I was moved into ICU and my family were advised that I was extremely unwell. Sepsis is a horrible experience and I urge people in our situation to take the temperature at least once a day.

Eventually, sometime during the December 2019 January 2020 period, which in many ways is much of a blur, I was restarted on IRIl trial which uses Dexamethasone, Revlimid and now includes Isatuximid. Because the sepsis had caused other issues with my veins the treatment had to be given through a PICC line.

My strength was decimated by the time I left hospital after three weeks. I could not climb stairs, so my bedroom was moved downstairs, rails put up in the toilet and shower and with special seats purchased.

What a change of life for my wife and myself. I had lost my independence. My wife had a doubling of her work load as well as dealing with the huge concern of whether I would survive. I needed help with almost everything I did. Our son had to step in and assist with driving and some shopping. The physical and mental tiredness we all experienced was huge, the extent of which cannot be underestimated.

Physiotherapy, started in hospital, was my salvation and was continued at home and then by video-link by staff from Eastern Health Oncology Rehabilitation and others after the COVID shut down happened. Goals were set, monitored and achieved, though slower than I wanted. Climbing the stairs, walking up the steep front drive, 10 minutes on the treadmill, completing the number of set exercise groups. 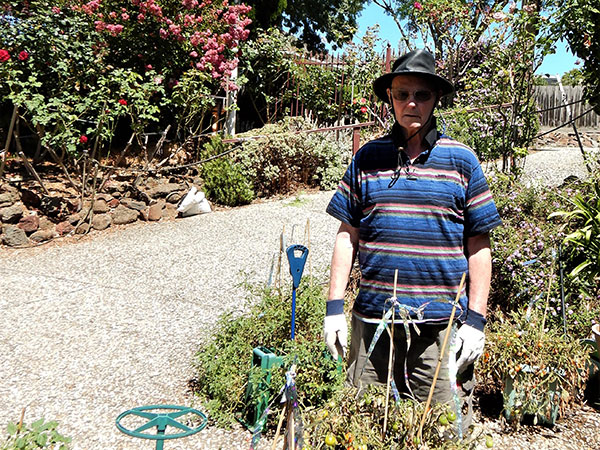 During March to July the MM protein in my blood began to drop and has remained with in normal range since. There were three more episodes of infection but prompt hospital treatment quelled these episodes quickly. The cause was never identified.

Some heart issues continued with 2 more heart resets. I was back in hospital again for 9 days until my BP stabilized. I had blacked out at home but was fortunate enough to avoid severe damage by sitting on my walker seat. This was the first time in my life I had ever fainted. I have had to learn to deal with my daily fluid allowance which hasn’t been easy and to get up slowly out of bed as a low BP appears to be the new norm for me.

In September I was started on a Hizentra infusion weekly at home. This is used in patients whose blood does not contain enough antibodies (proteins that help the body to fight infections and other diseases), also known as immunoglobulins. I am pleased to say I have only had one non-scheduled hospital visit since then.

With MM treatment one monitors temp twice daily and a high temperature took me into hospital again. Of course, COVID was also suspected. IV antibiotics were commenced and I was sent into COVID isolation. My temperature dropped quickly and I was discharged after 3 days with no-one really being able to tell me what had caused my problems. It could have been a stray virus.

My PICC line was removed in October 2020 as there was better access to my thin veins and my weight had stabilised. I am now much more active and only use my walker for attending doctors’ appointments. I can now climb stairs and am back in my upstairs bedroom.

So I continue to live with 2 diseases with distinctly different treatments. The Multiple Myeloma is being controlled with the isatuximide infusions and in December 2020 I started taking tafamidis to slow the progression of the ATTRwt.

Recently GCSF has been added to my medication to increase my white blood cells in anticipation of impending cataract operations.

My fluid intake issue still gives me some concern as too much fluid makes the heart work too hard and not enough can lead to dizziness or constipation or both.

Both Myeloma and ATTRwt can make one very sick and it has been difficult for my family. Dexamethasone can play around with my moods and that certainly does not help. The Covid-19 lock-downs increased the stress and In the middle of all this my wife’s mother died in hospital following a fall in a nursing home. It has certainly been a very stressful time for my wife.

But I am trying to enjoy life again and potter in the garden, growing cherry tomatoes though keeping away from pricks and thorns. I wear long sleeves and gloves to protect me from bruising and cuts as the dexamethasone has led to thinning of my skin. The doses have now been lowered significantly. I help cook meals and assist with household chores and we now shop on line.

We as a family are getting there after a huge a huge effort by all. Apart from driving and some tasks involving strength or balance, my independence is returning fast and I am about to ditch my walker. I can really say that life is certainly improving every day.