I have AL amyloidosis and I want to tell you my story and encourage all of you to work together with the AAN to get daratumumab funded in Australia.

The Pharmaceutical Benefits advisory committee, PBAC, meets in November to discuss funding this drug for the treatment of AL amyloidosis

By submitting our experiences of living with AL amyloidosis or if you have been treated with daratumumab, how that has changed your life, we may be able to do this.

Submit your story to the PBAC

I had been an active sportsman throughout my life and although a few kilograms overweight as I moved into my sixties, I have maintained a good physical condition through regular running and attendance at the gym.

In early 2017 I was consistently running 10kms in around 35 minutes.  September 2017 saw my wife and I in America and while we walked many miles each day, by mid-afternoon I was feeling tired and developed a chest pain.  I attributed this to indigestion and needing a hernia operation.  On our return to Australia, I found I could not run any more than about three kilometers before being short of breath and getting dizzy.  I visited my doctor who felt I was simply lacking in condition and that I needed to work a little harder to rebuild my strength and fitness.  I continued to try to run but the distances I could cover before getting dizzy became shorter each day.

Just prior to Christmas 2017 I entered hospital for the hernia operation and on reporting shortness of breath was required to undergo stress tests to enable the operation to proceed.  The cardiologist could see no apparent reason for my breathlessness and the operation proceeded with the anticipated success.  When the scans were reviewed at a later stage however, a slight thickening of my heart walls was evident.

On recovering from the operation, I continued to exercise but my condition worsened.  I began to lose my appetite and was losing weight.  In April 2018, and in constant discussions with the doctor, I commenced a series of tests with various specialists (nerve, respiratory, gastroscopy etc.) but nothing untoward appeared. I was also experiencing difficulty and frustration in my workplace at the time and this, together with the results of the tests, lead me to question myself as to whether I did have a medical illness or was imagining things. Nearing the end of May I broke down and had something of an anxiety attack.  At this stage, I took leave from work and returned to the doctor who, with one of his colleagues, felt my situation may not have been medical and I was referred to a psychiatrist who admitted me to a clinic.  After four days I sought a discharge but remained medicated for a further six weeks.  Through continuing discussions with me, my wife and daughter, the psychiatrist advised that my condition was not psychological but medical.  I returned to the care of my doctor.

In desperation, on 29 June, my wife took me to the Epworth Private Hospital in Richmond and I was admitted under the care of a specialist physician, for observation.  I was in the hospital for ten days.  During that time, I had numerous tests and was visited by a neurologist who could not identify an issue and a cardiologist, Dr Monique Watts who after just five minutes of discussion, advised that she was sure I had cardiac AL Amyloidosis but would need to conduct further tests to confirm this.  After undergoing a bone marrow biopsy and cardiac MRI, Dr. Watts informed me that this illness was indeed AL amyloidosis, which although not curable was generally treatable. Although the news was not good, just to have a diagnosis was a great relief and we felt that at last we had a way forward. This was a most significant step in receiving appropriate medical treatment and its importance to us cannot be underestimated.

Dr. Watts was aware of the Andromeda trial being run by Dr Simon Gibbs out of Box Hill Hospital that was evaluating the efficacy of using a drug called Daratumumab in conjunction with Cyclophosphamide, Bortezomib and Dexamethasone and I was asked to consider if I would like to participate in this trial.  I was interested and Dr. Gibbs came to see me in the hospital and I agreed to participate if selected.  While in hospital, I began to develop pain and numbness in my hands and feet, which remains in part to this day.

Over the next month, the tests requested by Dr. Watts were supplemented by others necessary to satisfy the conditions of the trial and it was confirmed that I did have AL amyloid with heart involvement. 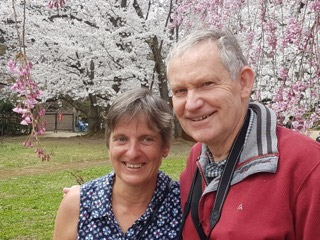 At this time my condition deteriorated to the point where my wife and I wondered if we should forgo waiting for the trial and begin some form of treatment.  We managed to persevere and on 26 July 2018 I was accepted into the control side of the trial (CyBorD cyclophosphamide, bortezomib and dexamethasone on its own) and began treatment four days later.

I note that the protein count in my blood at the start of my treatment was almost 1000mg/L and the walls of my heart were approximately twice their normal thickness.  After about six weeks of treatment (four cycles) my protein count had reduced to around 600mg/L and I had started to feel better.  By the end of the sixth cycle however, and approximately two months of treatment, my protein count had returned to its original level and I was advised that I may not be able to continue in the trial.  Despite this, I felt my physical condition was improving. Although weak and having difficulty breathing when my heart rate was raised, I continued to do some very light work in the gym.  I also saw a personal trainer who used most of her time keeping me flexible but provided incredibly positive support and encouragement to me and to my wife, forever pointing out the improvements that I would make each week, however small.

On 26 November 2018 my wife and I were advised by Dr. Gibbs that as my protein count had returned to its original level, I could not continue in the trial.  Although expecting this news, we were literally shattered to be hearing it.  We felt alone and without a way forward.  It seemed as if the end was near.  We were about to go to Hamilton Island for a week and were advised to go and try not think about things.  Dr. Gibbs outlined other possible courses of action, one of which was to ask Janssen if they would provide me with Daratumumab (the trial drug) on compassionate grounds but he felt this was an unlikely outcome. On Sunday 9 December, just as we were landing back in Melbourne and able to turn on our phones, Dr. Gibbs rang to say Janssen had agreed to his request.  We were so relieved and very excited, although of course we did not know whether Daratumumab would be effective.

Just over a week later, on 18 December and one week before Christmas 2018, I commenced treatment with Daratumimab in Epworth Eastern hospital. As I remember it, after six weeks on Daratumumab, my protein count had returned to normal and after a further six weeks, scans proved that my heart also showed signs of improving.  I returned to work in February 2019 and by November 2019 there was no sign of amyloidosis in my heart.

Today I am living a normal life and can participate in all the things I was doing before becoming ill.  I am not running as well as I was before but I am once again able to enjoy holidays, social outings, a run, a workout in the gym and importantly, help my wife with all the jobs around the house.  The impact of daratumumab has been truly remarkable but so too has the care and support of all those involved in my diagnosis and treatment.

If you experience any difficulties with your submission or have questions, please contact Pat Neely the AAN patient advocate at p.neely@bigpond.net.au or 0434283238

“How does daratumumab work in AL amyloidosis?”

Select any of the questions below to read Peter’s answers

Enrolling in a trial has proved to be a most positive experience for me. Why?

What hints would I give others?

Is having a dedicated Amyloidosis service helpful?

Was support from other patients helpful?