Geoff and Ros Phillips’ story: Living with a rare type of hereditary amyloidosis

Home/Patient Experiences/Geoff and Ros Phillips’ story: Living with a rare type of hereditary amyloidosis
Previous Next

Geoff and Ros Phillips’ story: Living with a rare type of hereditary amyloidosis

Geoff Phillips has a type of hereditary amyloidosis known as AGel or Gelsolin amyloidosis.

My first possible problem with amyloidosis was around 14 years ago when I had a hospital visit with a bad case of Cellulitis. Blood test showed a problem in the blood tests, no one knew what it was so they said don’t worry it must be an infection. This happened another 4 times over 12 years.

I had an eye problem around ten years ago and had tests that reported starting of Lattice Dystrophy. But I never followed it up until 2 years ago when this was confirmed.

Around 8 years ago I started to have a real fatigue problem and found it very hard to complete 18 holes of golf. Within a few months I was down to 9 hole & then could not play.

I retired 2 years ago & had big plans of traveling around Australia. Within a few months I had what we thought was a stroke, went to hospital and was sent home. They said no stroke. My wife and I were not happy with this so we went back to my GP who was also not happy. He sent me to a neurologist who could not tell what was wrong. He ordered many tests but still could not find the problem. He then asked for as much family history as I could find. The mystery then started to unravel as we found a number of family members who had Hereditary FAP. The Neurologist then made an appointment for me to attend the Amyloid clinic at the Princess Alexandra Hospital Brisbane where I met Rd. Dr. Peter Mollee and his team and underwent a number of tests and had my diagnosis of hereditary amyloidosis, Finnish type, or gelsolin amyloidosis confirmed.

Once this was discovered, we put a few of our retirement plans on hold to see how this would sort out. None of these plans have happened because it has been a steady downhill run. I have had to give up driving (which was very hard to do), it has been a big part of my life & independence. I have also had to stop playing golf the game I loved. Fatigue always won out even when I was using a cart. Also fishing, another of my favourite pastimes, has been a no goer as I can’t feel the hooks, can’t walk on sand as well the balance problem etc. due to the damage in my nerves causing neuropathy resulting in numbness in my hands and feet.

I also now have had to have a pacemaker fitted as an irregular heart beat due to nerve involvement was causing havoc with my blood pressure causing me to have a number of falls & dizzy spells. Now I have a walking stick and a wheelie walker (“the thing” as I call it) for longer walks, which are not too long these days. Another problem is my eyes, I have double vision pretty badly, also had to have my eye brows lifted as my left eye was covered by skin, this meant no vision from the left eye & right had around 59%. This is ok now but down the track will need to be done again.

All of this has put a huge stress on my wife as she is also my carer. She has had to take over everything and take me to all my appointments. She has to pick me up when I fall and that’s quite often. She has to cope with my down days when I find it hard to cope with this illness and the things I cannot do anymore. She has a little saying for me at this time, “get out and concentrate on what you can do, not what you cannot”. It is pretty unfair as her retirement has gone too. She does not have much of a life outside caring for me and that’s very tough as all her long term plans fell over too. She often says to me one of the hardest things is having to watch me deteriorate over the months and years.

I have hand it to her she pretty tough and keeps me going and supports me all the way.

Geoff has been diagnosed with Gesolin Familial Amyloidosis Polyneuropathy Finnish Type IV (FAP Finnish Type IV) HATTR.
The type of problems that Geoff has with this disease are peripheral nerve damage causing loss of feeling in hands and feet and slowly moving up the limbs, also facial nerve damage causing difficulty with eating and drinking, his memory and concentration and speech have also been affected. To manage this, we have obtained a drinking mug with overhand grip and thick handled cutlery to assist in food management.

Geoff also can’t drive anymore which has been particularly difficult for him to deal with as he has lost his independence and has to rely on a carer for an extensive amount of his needs.

Geoff also has Corneal Lattice Dystrophy, he has problems with dry, burning eyes and double vision. He has significant lethargy and ongoing problems with constipation, hypertension, balance, dizziness and falling over, his sense of smell and taste have also deteriorated. To correct these problems, he has had plastic surgery to rid the eyes of excess skin for better vision, medication to assist with constipation and hypertension, we purchased a quad walking stick to help with balance.

Also to add to the above problems Geoff’s heart started giving problems with irregularity due to the neurological effects of this disease the nerves in his brain decided to forget to keep his heart ticking so a pacemaker has been fitted to correct this problem. Sexual dysfunction is another problem caused by this disease and can be very traumatising for the patient. 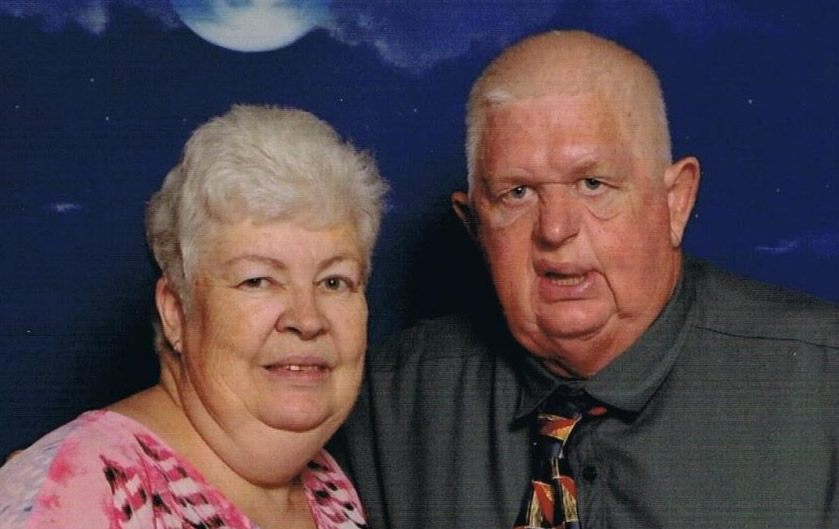 We try to take every day as it comes and live life to the fullest as best we can. We take a lot of short breaks and drives, we go out for lunches and coffees on a regular basis and now we are trying cruising to see how we cope with that. Geoff has good days and bad days sometimes he is in a lot of pain and all these things can affect how you live life.

Live life to the fullest and focus on the positive. When negative thoughts come and they will – they come to all of us, it’s not enough to just dwell on it. You’ve got to replace it with a positive thought.

The changes I have experienced in my health since I wrote my original story are ongoing but slow, but you know yourself when they happen. For me the biggest change is my balance and I now have blackouts, some mild and others that hit hard with severe sweats and loss of control of my ability to balance or stand.  I often have to yell for help to Ros or Kylie to quickly get me a chair so they can sit me down before I fall. Sometimes there is no time and I just fall to the floor. I have to be really careful outside and try and find something to sit on or hang onto while I call for help. Numerous times they get the call when I am on the ground. I now have my walking stick with me all the time to assist with balance just getting around.

My provider from “My Aged Care”, https://www.myagedcare.gov.au has organised a falls detection bracelet with a built in GPS that I wear every day, so if I fall outside I can be easily located.

My sense of smell is almost completely gone, same with my taste. Eyes are an ongoing problem I have had cataracts done & they tell me I will need to have my cornea operated on, possibly some sort of transplant, double vision, dry eyes & blurriness.

My carpal sensation is far worse than previously.  Same with my feet also the feeling in my hands, feet & most of my left hand side. Fatigue is an ongoing issue, I have to pace myself every day, I can do less now than I could one year ago.  I have had to get more help in the garden and to do jobs around the house. Usually I can get in a few hours in the morning but by lunch I pretty well have to sit and rest for a couple of hours to be able to help or play with my granddaughter after school.

When we travel now Ros has to do all the driving & planning to see we have places to stay that have disability accommodation with no stairs or obstructions. Same with restaurants.

I have had a couple stints in hospital with pains in the chest that they cannot find out what they are, had a number of different tests with no results, the good thing is that ruled out that my heart it was all good, no blockages or anything like that.

They now think it connected with the amyloid in the nerves. The pain is like an electric shock, not like muscle pain. This pain hits then drops away and hits again. This can go on for some weeks then stop but come back again.

I have been assessed through My Aged Care for a home package 3 which I have now got. An occupational therapist came out to assess me and our house and we have had to make some modification such as ramps in the door ways, hand rails in the bath room & toilets, lift chair to get up easily to help my balance as well and bathroom modifications for the future.

All of this has had a big impact on Ros who has to deal with all the changes in me health as well as changes that have to be made to our home.  It can be a very trying time. I also have been diagnosed with severe sleep apnoea & now have a CPAP machine. This was confirmed after a hospital stay where they detected that my oxygen levels dropped to dangerous level when sleeping. they found that similar to my heart not getting signals correctly.

In spite of all of the above Ros still encourages me to get out and about. Before the Covid-19 restrictions she was arranging a few days away from time to time in interesting places. We hope to continue doing this very soon. We have learnt very much to take one day at a time, enjoying our family and asking for help as we need it.