A Difficult Journey to a Diagnosis of AL Amyloidosis

A Difficult Journey to a Diagnosis of AL Amyloidosis

“Life need not be easy, provided only that it is not empty.”
Lise Meitner.

In 2014 I was diagnosed with smoldering myeloma. I had various blood tests and treatment for lymphoedema. I did not experience any major lifestyle issues, walked every day, rode a bike regularly and enjoyed the occasional drink.

During 2015 the situation started to deteriorate. With my smoldering myeloma I was treated for anaemia, had a bone marrow biopsy and my kidneys were identified as operating at 40%. I also started suffering shortness of breath which the GP misdiagnosed and prescribed the spray used to control asthma which I did not have. During the year however life got on with only mild interruptions.

2016 was the year to remember. It started with a trip to the local hospital ICU in February where I was diagnosed with bradycardia and kidney failure. I was transferred to the ICU at the Wesley Hospital.  ICU was an experience especially having to use toilet pans. As I was in there for my 72nd birthday the nurses allowed me to walk to a toilet carrying all my tubes, what a present!

It was found that my smoldering myeloma had become full blown multiple myeloma and a pacemaker was inserted to control an irregular heart function. I started dialysis 3 times a week and commenced a course of Chemo but the source of the kidney failure was thought to be caused by hypertension. In September a fistula was installed.

Being in and out of hospital and  in order to keep my mind active I used my experience and knowledge gained in over 40  years in various businesses to develop a web site to provide free advice to small and medium sized organisations.

Late in the year I had carpel tunnel syndrome surgery on my right-hand wrist.

In hindsight I now think my amyloidosis probably commenced in 2014 but it was at last identified in September 2016 following a biopsy of my swollen tongue showing amyloidosis which was also identified as being in the heart and bowel. The echo test showed the heart function was about 20%.

An adverse effect of the swollen tongue and Chemo was the loss and changing of taste buds, I even lost the taste for my occasional whisky.

My new hematologist/ oncologist gave me the sobering news that there is no cure for amyloidosis, and it was possible I would not see the following Christmas; however, chemo may delay the further development. The positive from this opinion was it has allowed time to get things in order.

In 2017 following the chemo course the good news was things looked stable.

2018 was quite uneventful apart from a few visits to the Holy Spirit Hospital. During 2018 and 2019 I developed at least 11 high fevers with a rare blood infection. Three days on intravenous antibiotics gave temporary relief. Luckily, I was able to get most of the intravenous injections at the dialysis clinic thus saving trips to hospital. In order to try and find the source of the infection I had an endoscopy at the Holy Spirit. During the procedure my blood pressure dropped to such a low level that worried the anesthetist to the extent that the gastroenterologist said he would rather not do the colonoscopy that was planned as I may not make it through the procedure.  Eventually we did proceed with the colonoscopy without anesthetic but with a mild sedative. The bad news being the procedure did not identify the source of the infection. Low blood pressure is an ongoing concern especially during dialysis. 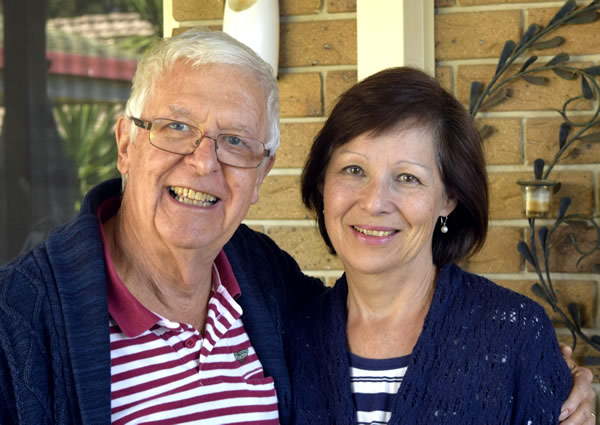 I like the gastroenterologist’s straight forward remarks and sense of humour. He once told me I was being held together with duct tape and hope.

In 2019 things have remained fairly stable except the shortness of breath appears to have increased. In July Dr Mollee identified an increase in the light chains resulting in another course of Chemo with Valcade (Bortezomib) and cyclophosphamide. The Cyclo has been withheld from 3 visits due to low platelets. DR Mollee is also of the opinion that the kidney failure was more likely a result of the amyloidosis rather than previously thought hypertension.

I have probably well-known other symptoms of the disease including paper thin skin that bruises and bleed with the slightest bump.

I have also learned never to trust a fart during the couple of days following Chemo. During these days I have often used men’s “nappies” for safety. Something in common with my one-year old granddaughter!

Living with Dialysis three times a week and Chemo once a week leaves only 3 clear days to really enjoy. It is surprising how you can live with the disease, a luxury that I look forward to is my maximum of 2 cups of tea a day and the occasional whisky (so far the latest chemo treatment has not affected my taste buds as much as the 2016 sessions). I still like to walk and mow the grass with many rests to regain breath.

The good news is that it is October and with only a little luck will be able to celebrate my wife’s birthday, our 43rd wedding anniversary and another Christmas with the family.

My journey over the past 4 years has been made bearable through the love and support of my gorgeous wife Christine.. We still take every advantage to go on picnics and slow walks. Even with the down days we usually find something to laugh about.

Keeping up to date with visits to the PA amyloidosis clinic and obtaining the benefit of Dr Mollee’s experience is a real advantage to longer term treatment. I am also lucky to have the support of others looking after my health including my GP, Nephrologist, Haematologist, Cardiologist and the nurses at the Dialysis clinic.