In September 2019, after a couple of days being out of sorts, my then 76 year old husband Ken suffered an occipital stroke.

We were fortunately at the cardiologist at the time receiving the results of an echo cardiogram. The cardiologist immediately had Ken admitted into St Vincent’s Hospital, Melbourne and brought in a neurologist. Over the next few days he underwent a series of tests including a Cardiac MRI resulting in the diagnosis of AL amyloidosis, affecting his heart.

Ken was then referred to the medical director of the VIC/TAS amyloidosis service, Dr. Simon Gibbs, at Box Hill Hospital, where a bone marrow biopsy was performed, which confirmed the diagnosis.

To say the least, we were in shock. We had never heard of amyloidosis. Ken is a nonsmoker,

nondrinker.  He has always been involved in sport and looked after his health. In1988 he was diagnosed with a malignant tumour in the left kidney and this kidney was removed. But since then he had been a fit, healthy man who is the rock of our family.

We quickly realized that we now faced a huge challenge of which we understood very little.

Our education started at once. We received a little blue booklet from the hospital outlining AL amyloidosis and treatment and Ken started his journey with chemotherapy at the Box Hill Hospital at once.

The staff in oncology were amazing. They helped us understand Ken’s disease and treatment by taking us slowly through each aspect of the chemotherapy program. 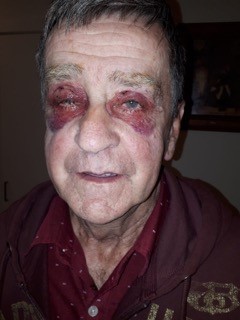 But by then COVID was shutting down Australia and changing all our lives. After communication between Ken’s Box Hill specialists and our wonderful GPs who agreed to administer Ken’s treatment from home and support us. The wonderful Box Hill oncology staff set us up with the equipment we needed.

Many horrid says followed. Ken experienced considerable bruising around his eyes because of the amyloid in the blood vessels known as periorbital ecchymosis or raccoon eyes.

This caused him considerable discomfort and needed drops to help with the irritation.

He lost a lot of weight because of constant diarrhoea and there were days which led into months, that we could have easily said, enough is enough. But Ken battled on and is here today and two years after his  initial diagnosis was made he is in remission.

Life is different.  Ken is slowing regaining his weight and strength but the neuropathy in his feet and legs has left him with considerable balance problems.  We are learning to work around these difficulties and to make the most of every day and enjoy and rejoice in the smallest things.

There is lots of laughter.  Life is a journey and we are blessed every day as ours continues.

The Team at Box Hill hospital has always been there for us, so professional and we thank them most sincerely, along with our GP’s and our fabulous family.

On Feb 6 we celebrated our 56th Wedding anniversary and are really grateful for the years we have spent together so far.

Thank you for reading Ken’s story.

For more information about this Ken and Marg’s experience you can send them an e-mail using the form below.